The results of the thesis from Danny Schnerwizki have been published in Life Science Alliance.

The WT1 gene fulfills a central role in the development of a healthy, proper functioning kidney. Mutations in WT1 lead to impairments in kidney development and cause Wilms tumors, a pediatric kidney cancer. Researchers of the Leibniz Institute on Aging – Fritz Lipmann Institute (FLI) in Jena have now discovered a further important function of WT1. It is also active outside the kidneys in the central nervous system and is involved in controlling movement. If the gene is missing in the spinal cord, locomotor aberrancies occur. The results have now been published in Life Science Alliance.

Jena. Transcription factor WT1 (Wilms tumor 1) has been known for nearly 30 years and it is significantly involved in the development of a healthy and properly functioning kidney. Impairments in the developmental process lead to kidney cancer in children. The gene is also responsible for maintaining kidney function. Recently, even an association between unexplained childlessness and mutations of WT1 has been demonstrated.

Researchers of the Leibniz Institute on Aging – Fritz Lipmann Institute (FLI) und the Institute of Zoology and Evolutionary Research of the Friedrich Schiller University Jena (FSU) together with colleagues of the University Uppsala, Sweden and the Helmholtz Zentrum München have now discovered another important role of the WT1 gene: It is also active outside the kidney in the central nervous system and is involved in the differentiation of spinal cord neurons that control rhythmic movements. The results have now been published in the journal Life Science Alliance.

“This result was completely surprising for us, because we thought we already knew the WT1 gene quiet well after all those years of research”, tells Prof. Christoph Englert, Group Leader at FLI. “Until now, the Wilms tumor suppressor gene WT1 was known as an important gene for the development and maintenance of various organs, such as kidneys and heart. But it was new to us, that it also influences our movements.” But what function does this gene play in the central nervous system?

The researchers analyzed in which areas of the spinal cord and brain the WT1 gene is active. They examined mice that lacked the gene. “A loss of the gene changes the motor processes; the mice show problems with the coordination of their legs, which lead to a changes in their walk”, tell Dr. Danny Schnerwitzki, first author of the study.

The intestine, respiration and our walk are controlled and regulated by neural networks that work like circuits. Neurons of the brain and spinal cord are also involved in these processes. “We were able to show that the WT1 gene controls a certain group of neurons that is responsible for locomotion”, says Dr. Schnerwitzki about the results. They show that the development of certain neurons in the spinal cord depends on WT1 expression and that a loss of WT1 is linked to locomotion.

“In a second step, we investigated the development of neurons as a function of WT1 expression and performed locomotion analyses of WT1 knockout mice”, says Prof. Englert. The researchers used molecular biological and electrophysiological approaches as well as a special X-ray method developed at the Institute of Zoology and Evolutionary Research of FSU to visualize changes in locomotion. “Our data indicate that the gene not only contributes to the coordination of locomotion, but is also required for proper differentiation of spinal cord neurons during embryogenesis”, says Englert.

Also in Zebrafish, the researchers found WT1 in neurons of the spinal cord. This indicates that the function of the gene is evolutionarily conserved. In fish, the gene seems to be responsible for controlling their swimming movement.

The study does not only demonstrates the previously undescribed importance of WT1 in the development of spinal cord neurons, but also underlines its role in the circuits responsible for the functional implementation of locomotion in the neurons. “Studying patients with a WT1 mutation could show us what differences in the role of WT1 humans in comparison to the model systems show and uncover its contribution to locomotor changes.” 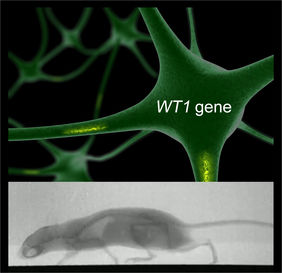