The regenerative capacity of the nervous system declines during aging; the risk to develop nerve pathologies increases. Our PhD candidate, Robert Büttner, and his colleagues from the Leibniz Institute on Aging (FLI) in Jena investigated the regeneration of aging nerves in collaboration with colleagues from the university hospital Jena and the University Bonn. They found that a disturbed immune response leading to chronic inflammation is significantly involved in this. Moreover, the researchers demonstrated the efficacy of an anti-inflammatory therapy to improve nerve regeneration and identified promising aging markers that are currently being tested as therapeutic targets.

Although the aging-associated decrease of regenerative ability has been known for a long time, its causes are still largely unexplored and therapies have been ineffective or impossible so far. Researchers of the Leibniz Institute on Aging – Fritz Lipmann Institute (FLI) in collaboration with colleagues of the University Hospital Jena and the University Bonn were able to gain important insights into the underlying molecular and cellular processes of nerve aging and identified possible therapeutic targets. The results of the study were published in the journal Aging Cell recently.

The researchers investigated the regenerative capacity of the peripheral nervous system in the model organism mouse. Young mice were able to regenerate much faster after an injury than older mice and also showed a faster complete recovery. In contrast, old mice did not achieve a complete recovery of nerve functions even after longer times of regeneration.

“The peripheral nervous system is a complex system of different cell types, which have to communicate and collaborate closely,” Dr. Helen Morrison, Group Leader at FLI explains. “This is even more important during the regeneration process of nerves, which has to be highly coordinated in time and space to be successful.” Main actors in the regeneration process are neurons, Schwann cells, and immune cells – especially macrophages – that help to remove the injured nerve and debris to provide space for regenerating nerves.

Prior studies have shown that particularly the functions of Schwann- and immune cells are impaired in the aging process. Researchers previously assumed that the aged immune system was not sufficiently activated in response to injury or that its cellular function was reduced. Thus, an impaired immune response – unable to clear the area for the regenerating nerves after an injury – was suspected to be the cause of the reduced regeneration capacity.

“However, this appears to be only one part of the story”, tells Robert Büttner, who was working on this project for his doctoral thesis at FLI and is first author of the study. “We do see that the immune response after nerve injury is initially reduced, but upon closer observation it merely is delayed”, explains Büttner. “In fact, old injured nerves show an overshooting immune response leading to a persistent inflammatory state impairing regeneration.” Consequently, the researchers found that an anti-inflammatory treatment with acetylsalicylic acid (ASA, known as Aspirin®) effectively prevented this development and significantly increased nerve regeneration in old mice.

The team then investigated how the overshooting immune response influences regeneration. They analyzed signal molecules that transmit information between the involved cells. “Cytokine CCL-11 was the most interesting one”, Dr. Michael Reuter, Postdoc in the Morrison Research Group, sums up. This cytokine is mainly known from allergies and parasite defense; additionally a role in declining cognitive function during aging has been described. “However, its function in nerve regeneration was completely new”, Dr. Reuter emphasizes the results.

The researchers were able to show that CCL-11 interfered with Schwann cell differentiation, preventing them to optimally support regeneration. This altered Schwann cell behavior likely evokes an increased infiltration of immune cells, leading to a persistent hyper-inflammatory state, accompanied by a diminished regenerative capacity; a vicious circle.

“The identification of individual signaling molecules involved in the nerve aging process opens up completely new targets for promising therapies”, says Dr. Morrison. “In contrast to the non-specific inflammation inhibitor ASA with its known side effects, this opens up the possibility to very precisely intervene in the regeneration process.” In this context, it is particularly interesting that both mice and humans show chronically elevated CCL-11 levels in their blood during aging. Thus, CCL-11 could be a specific aging marker. Currently, the team around Dr. Morrison is investigating, whether the cytokine CCL-11 indeed is suitable as a therapeutic target aiming to improve nerve regeneration in old age. 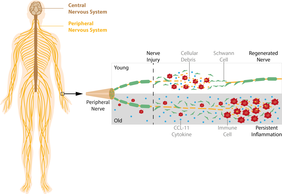 The immune system plays an important role in the regeneration of peripheral nerves. In old age, the immune response is disturbed, leading to a persistent inflammation that impairs regeneration. (Graphic: Lars Björn Riecken / FLI, Source: http://de.freepik.com and others)