To maintain organ functions, the proteins in the cells need to be kept in balance (proteostasis). This state is disturbed with increasing age. One possible cause is glycation, in which sugars and proteins combine irreversibly. These advanced glycation end products (AGEs) accumulate and can lead to inflammation and damage. A team of researchers from the Leibniz Institute on Aging - Fritz Lipmann Institute (FLI) and the University Hospital Jena (UKJ) has now investigated where AGEs are formed in the cell, what influence they have on proteins, and whether they contribute to aging and age-related metabolic diseases.

Jena. Described in 1912 by the French biochemist Louis Maillard, the chemical reaction, in which sugars combine with proteins, leads to the formation of molecules that are no longer degradable (advanced glycation end products, AGEs). This process, known as the "Maillard reaction," seems to play an important role in the aging process and is considered to contribute to numerous chronic diseases. For example, AGEs are seen as risk factors for vascular disease in diabetes mellitus and promote stiffening of blood vessels. Glycation affects various proteins in the body and might impair the functionality and structure of the affected cells and tissues. The glycation process is therefore increasingly seen as a potential driving force behind metabolic diseases and the aging process.

But where exactly does glycation take place in the cell, what effects does it have on specific proteins, and how does glycation affect the function of the whole cell? A team of researchers from the Leibniz Institute on Aging - Fritz Lipmann Institute (FLI) in Jena and the University Hospital Jena (UKJ) has got to the bottom of these and other questions. The study, published in the journal “Nature Communications”, investigates the pathophysiological effects of AGEs on intracellular proteins and their possible contribution to the development of metabolic diseases and aging.

"Non-enzymatic glycation of proteins by the reaction with sugars or highly reactive dicarbonyls such as glyoxal increases when glucose levels in the body are persistently high," says Dr. Alessandro Ori, head of the research group at FLI. One of the most common AGEs is N(6)-carboxymethyllysine (CML), whose formation is triggered in part by the reaction with glyoxal. "CML is chemically stable and accumulates in human tissues mainly in diseases such as diabetes mellitus and atherosclerosis, but also in normal aging. CML can therefore be understood as a biomarker of aging," adds Prof. Regine Heller from the UKJ. While glycation of extracellular proteins such as hemoglobin or collagen is well described, little is known about this modification in intracellular proteins.

To be able to capture the changes in proteins caused by glycation in the entire proteome, the researchers used two models. "On the one hand, we used classical cell cultures, such as fibroblasts and endothelial cells, to determine the influence of glycation on proteins. On the other hand, we also used cells from organs of young and old mice to deduce the holistic influence of glycation on protein function and mode of action," Dr. Ori explains the procedure of the proteome study.

A novel workflow based on selective enrichment of CML-modified peptides combined with mass spectrometry enabled the comprehensive characterization and quantification of target proteins and their metabolic pathways. Hundreds of specific glycation sites were revealed for the first time in both models.

Glycation as a function of protein turnover and abundance

Regardless of their localization in certain compartments of the cell, proteins that were metabolized more slowly were more likely to undergo glycation than proteins with faster turnover. "Slower turnover proteins were more frequently modified," Dr. Ori said, explaining the result in both models. This is consistent with previous studies that have shown that AGEs accumulate primarily in tissues with slow protein turnover, such as cartilage and skin.

"Although glycated sites were detectable in the proteins studied throughout the dynamic range in both model systems, glycation correlated strongly with protein abundance. That is, if the proteins were very abundant, they were also more frequently modified," Dr. Ori summarized. "From these results, we deduce that both slow turnover and protein abundance are important key factors for protein glycation in cells." These proteomic results were obtained as part of Simone Di Sanzo's PhD thesis at FLI within the DFG Research Training Group 2155 "Protein Modification: A Key Mechanism for Ageing (ProMoAge)”.

"To study the impact of aging on glycation, glycation sites were quantified in the heart, kidney and liver of young and old mice, and analyzed in parallel with changes in the whole proteome of the same organs," explains Dr. Ori. This combination of data enabled the identification of specific sites in the organ samples; glycation appears to be organ-specific.

"However, modified proteins such as histones were also identified in all the organs from old mice studied," adds Prof. Heller. "Our data suggest that, on the one hand, glycation is largely organ-specific and, on the other hand, the extent of modification increases with aging in a site-specific manner, which is probably due to the lower amount and activity of enzymes for detoxification of highly reactive dicarbonyl compounds in old organs."

"In endothelial cells, our treatment with glyoxal led to cell cycle arrest, i.e. cell division was massively inhibited by the accumulation of CML," explains Dr. Katrin Spengler from the UKJ, who co-led the study. This was partly due to altered expression of cell cycle regulators. In order to better understand how protein glycation affects cell cycle progression, the researchers focused on tubulins, which have among other tasks an important function in cell cycle regulation. To fulfill their functions, tubulins form filaments, the so-called microtubules, which need to undergo continuous assembly/disassembly processes.

“Performing experiments with purified glycated tubulin and looking at microtubules in glyoxal-treated endothelial cells via immunofluorescence, we found changes in microtubule dynamics, which may explain, in part, the inhibition of cell division,” Dr. Spengler continues. Glycation of tubulins may interfere with other important modifications of tubulins such as acetylation thereby changing the “tubulin code”, which determines the function of microtubules.

Understanding the role of glycation and its impact on aging cells

This study powerfully demonstrates how the consequences of glycation for the whole proteome can be studied by combining mass spectrometry analyses with mechanistic studies in cellular systems. The analysis allows mapping of glycation sites and shows how distinct glycations are associated with specific cellular functions. This contributes significantly to a better understanding of how protein glycation may affect aging and age-related metabolic diseases.

"When exposed to pathophysiological concentrations of sugars and highly reactive dicarbonyl compounds over a prolonged period of time as it is the case in the elderly or diabetics, glycation of tubulin and other proteins may be an initial event that progressively leads to impairment of cell function and, ultimately, to organ dysfunction," the researchers summarize. Identifying specific glycation sites and/or the extent of glycation could therefore help to identify a risk for later age-related diseases. 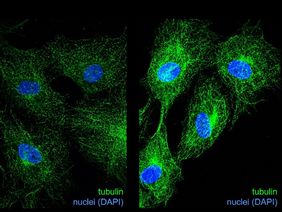