Cancer cachexia is a complex metabolic disease accounting for approximately one third of all cancer-related deaths worldwide. So far, there is no effective therapy for this muscle wasting disease. Researchers from the Leibniz Institute on Aging – Fritz Lipmann Institute (FLI) in Jena, Germany, show that the extracellular ligand Wnt7a effectively counteracts muscle wasting through activation of the anabolic AKT/mTOR pathway and thereby reverts the loss of muscle stem cell functionality and muscle mass. The results have now been published in the journal Molecular Therapy: Oncolytics.

Jena. Cancer Cachexia often occurs in cancer patients in an advanced state. This metabolic wasting syndrome leads to severely reduced muscle mass and fat tissue, which cannot be reversed by nutritional support. Furthermore, muscle regeneration is affected during cancer cachexia due to impaired muscle stem cell function. A problem that also occurs often in the aging process. Cancer cachexia is associated with a poor prognosis for patients, since it weakens patients towards a point that no further therapy, such as chemotherapy or surgery can be tolerated. So far, this multifactorial syndrome has not been fully understood and effective therapies are still lacking.

The research group "Stem Cells of Skeletal Muscle" lead by Dr. Julia von Maltzahn at the Leibniz Institute on Aging - Fritz Lipmann Institute (FLI) in Jena, Germany, investigated the extracellular ligand Wnt7a and was able to show its positive influence on muscle mass and muscle stem cells in cancer cachexia independently of the tumor cell type causing cachexia. Wnt7a has already been in focus in muscular dystrophy studies: "It was already known, that Wnt7a ameliorates muscular dystrophy", explains Dr. Julia von Maltzahn, junior group leader at the FLI. "We were interested if similar positive effects also occur in cancer cachexia." The results of their studies have now been published in the open access journal Molecular Therapy: Oncolytics.

Influence of Wnt7a on muscle mass

The research group was able to show in human skeletal muscle cell lines and in a mouse model that Wnt7a treatment counteracted muscle wasting and improved muscle stem cell differentiation - two major symptoms of cachexia in cancer patients. The extracellular ligand Wnt7a activates the anabolic AKT/mTOR pathway in myofibers and reverts the loss of muscle stem cell functionality. "Our results show that Wnt7a has a dual function in skeletal muscle: it activates an important signaling pathway enhancing muscle mass and drives muscle stem cell expansion in skeletal muscle, which is necessary for regeneration", says Dr. Manuel Schmidt, postdoc in the research group. This makes Wnt7a a promising candidate for the treatment of muscle wasting diseases also in humans, since the protein has the same function in mice and men.

Wnt7a is able to prevent muscle loss in cancer cachexia making it a potential candidate to be used during treatment or surgeries. In addition, the extracellular ligand could be used as a supportive treatment during therapy/surgery. Wnt7a leads to an increase in the stem cell population in the muscle, which supports muscle regeneration after surgery. Following these research results, the researchers are now testing further possible applications. 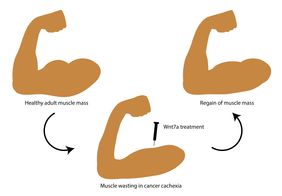