Back-to-back: Current Studies on the Longevity of Naked Mole-Rats

Martin Bens published his results from his dissertation in BMC Biology.

Naked mole-rats can live considerably longer than other rodents like mouse, rat or guinea pig. This makes them outliers among mammals, just as humans with their maximum lifespan of about 120 years. The identification of genetic and molecular characteristics that distinguish long-lived from short-lived species enables the identification of naturally evolved mechanisms to a long and healthy life. Researchers of the Leibniz Institute on Aging - Fritz Lipmann Institute (FLI) together with colleagues of other research institutions now published two back-to-back studies on the longevity of naked mole-rats in the journal BMC Biology.

Jena. The “Disposable Soma Theory of Aging” suggests that each organism has only limited energy at its disposal. This energy must be distributed between the maintenance of somatic tissue and reproduction. Species confronted with a high extrinsic mortality are more likely to invest their energy in reproduction, thus ensuring the survival of their species. However, species confronted with a low-extrinsic mortality seem to invest more energy into the maintenance of body functions. Thereby, these species keep their bodies “healthy”, thus enabling a longer reproduction phase during the longer life.

Naked mole-rats (Heterocephalus glaber) are considered to be particularly long-lived among rodents; in comparison to mice, rats or guinea pigs they can live up to 30 years. During their long life these mouse-sized animals stay healthy and fertile. This raises the question which molecular and genetic characteristics can explain their long and healthy lifespan.

Research teams of the Leibniz Institute on Aging – Fritz Lipmann Institute (FLI) in Jena together with colleagues from other research institutions investigated genetic and molecular characteristics of naked mole rats in comparison to other species. These two back-to-back publications on questions of longevity of naked mole-rats have now been published in the journal BMC Biology.

In the first study, researchers around Dr. Martin Bens from the Leibniz Institute on Aging together with colleagues of the Leibniz Institute for Zoo and Wildlife Research (IZW) investigated the link between reproduction and longevity of naked mole-rats. Interestingly, naked mole-rats live in underground tunnel systems in East African Savanna and are organized in large eusocial colonies. In a colony, only the queen and one to three male pashas are devoted to reproduction. However, unlike eusocial bees, in a colony of naked mole-rats even workers are capable of reproduction, but their sexual maturation  to become active breeders is suppressed by the presence of the dominating breeding pair.

To investigate the transition from workers to queen or pasha, non-breeding male and female workers were separated from their colony and paired with a partner of another colony. These animals began to found a new colony and started to reproduce. The researchers compared the tissues of breeding and non-breeding animals by transcriptome analyses. The results were compared with those obtained from a similar analysis of breeding and non-breeding guinea pigs (Caviidae), which are closely related to naked mole-rats, but have a much shorter lifespan.

„Our results show, that more than 50% of the investigated genes of naked mole-rats and guinea pigs are differentially expressed and that these genes show specific age-related characteristics“, says Dr. Bens. “There are no significant differences between sexes of non-breeding naked mole-rats in contrast to substantial differences in non-breeding guinea pigs. However, after sexual maturation, both sexes became not only distinguishable by morphology and behavior, but also show significant differences in gene expression profiles of their tissues”, explains Dr. Bens.

These results also show links to an extended lifespan: Undergoing the process of sexual maturation, breeding naked mole-rats show molecular signatures linked to an extended life- and healthspan. In breeding guinea pigs however, such molecular networks are diminished. This result fits to the long lifespan of naked mole-rat queens of up to 30 years; despite producing about 40 offspring each year throughout their life.

Recent studies based on demographic profiles of naked mole-rats show that the risk of mortality of these animals does not increase with age. This was seen as indication that naked mole-rats do not age. The second study published in BMC Biology, from researchers of FLI, IZW and the Institute of Anesthesiological Pathophysiology and Process Engineering, University of Ulm, examined the aging process in naked mole-rats on a molecular level. To identify factors that distinguish long- from short-lived species, they compared liver tissues of naked mole-rats to those of guinea pigs.

In combining proteomic and transcriptomic analyses, the researchers were able to find differences in the mitochondria, the “powerhouses” of cells. “We found that naked mole-rats and guinea pigs use different ways to generate energy”, explains Dr. Alessandro Ori, junior group leader at FLI and leading author of the study. For instance, naked mole-rats show an increased capacity to utilize fatty acids. “We further identified aging associated changes of protein level in livers of young and old naked mole-rats. These results support the notion of a low, but existing aging process in naked mole-rats”.

Interestingly the aging process affected the same group of proteins responsible for eliminating toxic substances in humans. This suggests a similarity between the aging processes of these two long-lived species. With regard to the thesis that naked mole-rats do not age, the recent results show a low but detectable aging effect on a molecular level in naked mole-rats. “We now have to examine if the observed molecular changes during the life of naked mole-rats also have an impact on their health and lifespan, as it does in other model organisms such as the roundworm C. elegans.” 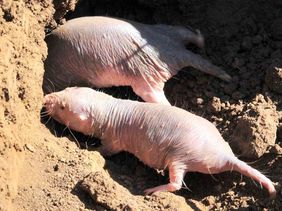